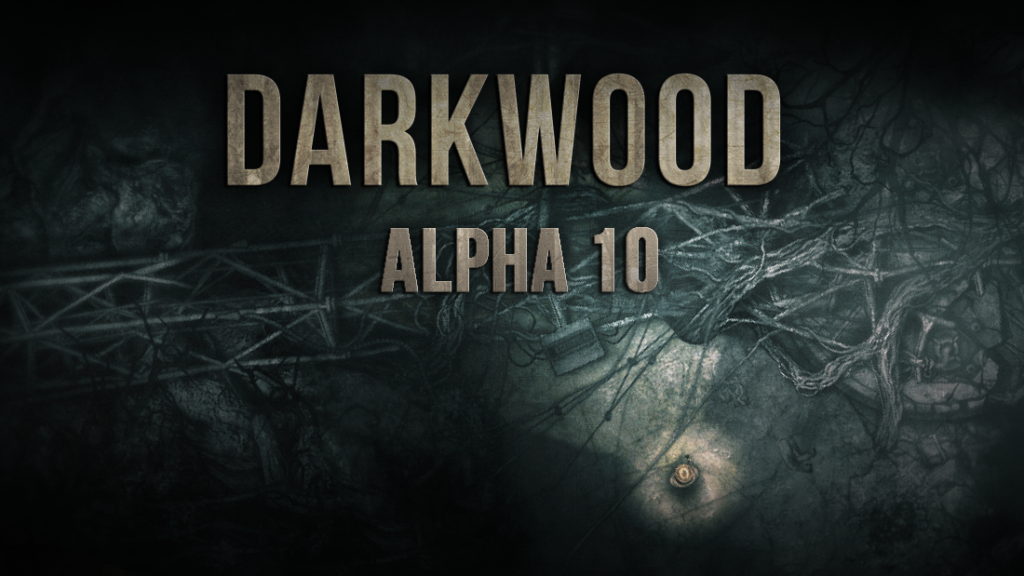 This update brings a lot of small changes, fixes and additions.

– Updated engine to Unity 5.5.2. Should help with performance and crashing on some hardware configurations.
– The game will now run in a “high performance” mode if you have at least 4GB of RAM on Windows. This means that textures will not be loaded dynamically, which will help with stuttering during exploration.
– Improvements to how audio is loaded, which also should help with stuttering.
– The Radio Tower has been reworked, and it’s underground is now accessible.
– Added new locations, and added new stuff to some existing locations.
– Added new dialogues for existing characters.
– Reworked the transition area between chapters a bit.
– Added a lot of new story items.
– Added new journal entries.
Added remaining outcomes for the Doctor in Chapter 2.
– Changed physics of throwing items.
– Changed the amount of parts required for Piotrek’s equipment hunt.
– Changed the sprite for the cursor, when you can’t currently interact.
– Changed balance of generator gasoline usage.
– Changed how you tell the Bikeman from where you want to get your stuff moved.
– Added descriptions to weapons which don’t interrupt enemy animations.
– Added new modifiers to some weapons.
– Changed crafting requirements for some items in the workbench, and added new items.
– Rebalanced reputation gain for some items.
– The well can now be used once per day at any time of day, not only night.
– Increased duration of invisibility perk.
– Added a exclamation mark icon when you have unshown items, or unheard gossip during dialogue.
– Wolfman ain’t a pushover anymore.
– You can “disarm” mushrooms when throwing items at them.
– Vines can now be hit at any part of their body, not just root. They also die after some time when catching you.
– Mushroom man now explodes after some time when chasing you.
– Added a shortcut from the hideout in the swamps.
– You can also visit the Musician in the Church Ruins when on the Violin quest.
– Added confirmation when trying to eat the Mushroom Granny.
– Corpses inside a hideout that are empty will disappear after some time.
– Mushroom man now chases closest enemy when he wakes up, not automatically the player.
– Changed explosion damage for barrels.
– Changed character spawn areas for Chapter 2.
– Changed amount of Baby Banshees spawned by Banshee. Also changed their balance.
– Added new events and dialogues for the Musician in Chapter 2.
– Changed the Elephants’ requirement for entering their house.
– New sounds, art and animations.
– New random objects around the woods.
– Less huge roots in the swamps.
– Updated some dialogue portraits.

In other news:
During the Winter holidays, we made a special event which could happen during the night. You would hear a knock on your door along with a weird variation on “Jingle Bells”, and if you went to check it out, you would find this at your doorstep: 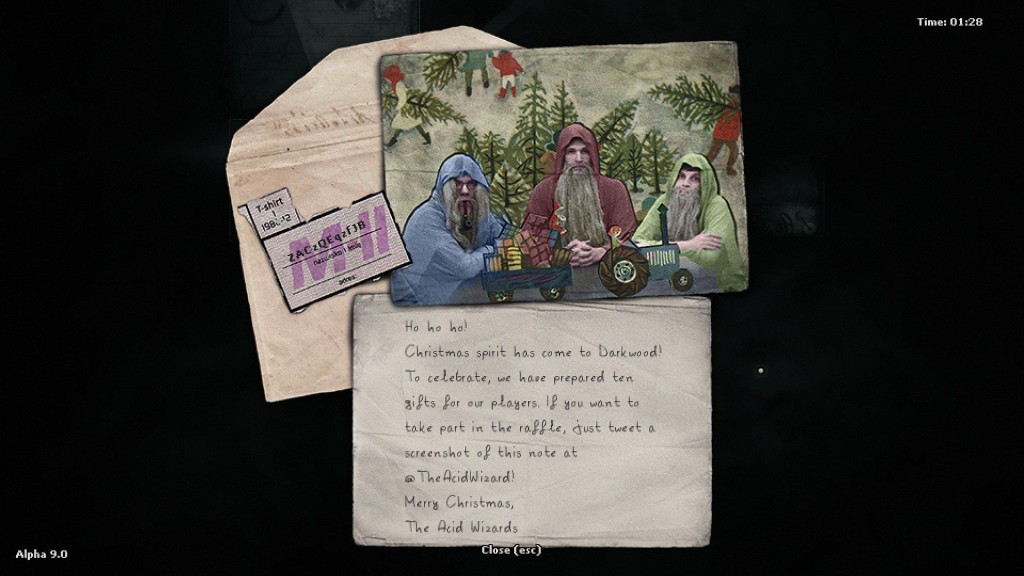 I’d like to send a special shout out to ShadyS, who helped with squashing many bugs for this release!

This is probably the last major alpha version of Darkwood. After we completely finish the epilogue and do a balance pass, it’s beta time!

Here’s a bugfix update for some of the issues that were introduced in the last major update. There are still some things left to be fixed, but all the most annoying bugs have been squashed, at least to our knowledge!

Fixes
– Fixed events with a delay not being completed in very rare cases if you save and reload your game immediately after it fires. This happened very rarely, but could break the game.
– Fixed many objects not saving correctly or being a bit different after being loaded.
– Fixed many random small issues like some sounds not playing in rare cases.
– Fixed dead enemies having their sprite duplicated.
– Fixed Human Spiders screaming even after being killed.
– Fixed multiple ways of getting stuck on the second underground door in the tunnels.
– Fixed getting stuck in the void after completing the Cellar dream.
– Fixed performance drop when hanging around the Huge Lake for some time.
– Fixed huge lag when the Talking Tree is burning.
– Fixed being able to exit the second doctor dream.
– Fixed some instances of the game breaking after loading the game directly after ending the doctor dream.
– Fixed flicker when clicking on objects.
– Fixed invisible objects inside of Snail’s house in some cases.
– Fixed some AI behaviour, especially during night time.
– Fixed some night events not happening.
– Fixed help message being visible in main menu.
– Fixed a rock blocking the way in the second part of the underground tunnels in a specific case.
– Fixed several issues in Mushroom Granny’s or Child’s dialogue.
– Fixed inventory respawning in dead trader NPCs.
– Fixed Wolf dialogue when you kill the Sister and Chicken Lady at once.
– Fixed infection not saving correctly.
– Fixed infinite item durability bug.
– Fixed journal pointing to a “empty” biome.
– Fixed Cripple dialogue where he points you in a unspecified direction.
– Fixed ambient light popup in village entrance.
– Fixed having to re-enter Mushroom Glade to finish Mushroom Granny’s quest if you’ve done the thing she asks of you BEFORE visiting her for the first time.
– Fixed a few issues with the Human Spider Minion spawner.
– Fixed glitch if killing The Three via molotov.
– Fixed The Three disappearing after having a dream during morning mode.
– Fixed root sprite glitches in Swamp hideout during morning mode.
– Fixed dark overlay textures along the edges of the world.
– Fixed items resetting if you’ve died in chapter 2 on permadeath.
– Fixed lakes sometimes overlapping the Quarry.
– Fixed unnecessary final workshop upgrade.
– Fixed man in church not having the medallion.
– Fixed not having the plastic chick on start of chapter 1.
– Fixed some objects being on bad layers.
– Fixed quarry sometimes not spawning.
– Fixed old version of snail location spawning on rare occasions.
– Fixed gasoline trail saving incorrectly.
– Fixed dead cripple disappearing after you’ve burned the tree.
– Fixed invisible legs when walking on the bridge in chapter 1 village. I had to make the water impassable, maybe we’ll find a way to fix this in the future.
– Fixed some characters being afraid of roads 😛
– Fixed missing message when trying to quit in the 1st part of prologue.
– Fixed events in the Big Lake after loading.
– Fixed issues with the quest outcomes in the Musician house.
– Fixed missing key in the church underground if you’ve killed the chomper in the dream.
– Fixed items resetting for a game loaded from a previous compatible alpha and immediately loading a game after that.
– Fixed being able to destroy Piotrek’s door.
– Fixed Swamper bugging out if stepping into a beartrap.
– Fixed chain trap remains not disappearing after some time.
– Fixed being able to talk to the underground door after you open it.
– Fixed mushrooms rotting during time freeze or inside trader inventories.
– Fixed incorrect behaviour of mutated dogs in Wolfman’s Old Woods hideout.
– Fixed incorrect item generation in some containers.
– Fixed duplicate sounds for Chomper.
– Fixed banshee first visit sometimes appearing outside of hideout, making it very risky to grab her “gift”.
– Fixed barricade removal sound being too loud.
– Fixed madman’s chest being empty.
– Fixed some windows having bad sprites after having their barricade destroyed.
– Fixed bad chomper behaviour in some ruins in the swamp.
– Fixed some mushrooms being underwater in the mushroom glade.
– Fixed double footsteps when running with a rifle.
– Fixed very long burning effect when walking into the Talking Tree’s roots fire.
– Fixed some particles not playing correctly after some time, like gas, blood splats etc.
– Fixed incorrect crafting schematics in hideout 1 and 2.
– Fixed not being able to jump over the rebuilt fences in the swamp hideout.
– Fixed incorrect loading of characters that escaped out of their location and got killed.
– Fixed morning sound not disappearing if you’ve died when it was playing.
– Fixed having to rebuild the well each time after load.
– Fixed some visual bugs in the quarry.
– Fixed chomper getting glitched out when trying to eat a meat lure.
– Added more columns to the porter inventory so it is visible on small screens if you’ve transported a lot of stuff.

Have fun,
The Acid Wizard 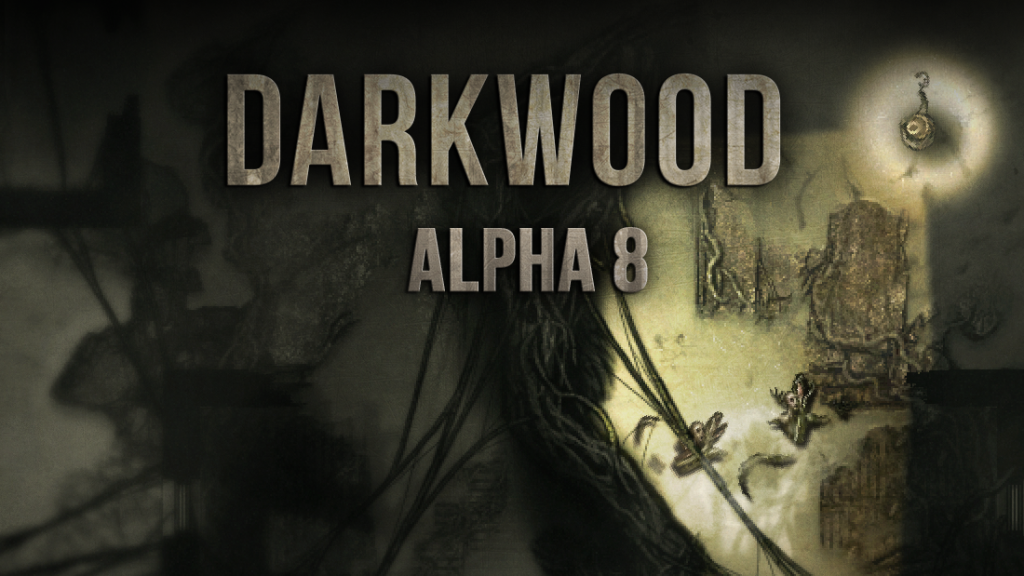 Get ready for the biggest update yet! I know we’ve said that before, and there were some pretty epic updates in the past… But seriously, this one takes the cake. It’s so big I wouldn’t know where to begin when trying to list all the changes we’ve made, so I’ll just name the main things:

– CHAPTER TWO! That’s right, a whole new world for you to explore.
– Chapter 1 is mostly the same, although it has been rebalanced somewhat.
– Get ready to get your feet wet – a new Swamp biome!
– Around a half a dozen of new NPCs!
– New enemies, with more varied and advanced behaviour!
– New traps, items and weapons!

I won’t spoil all the new content, but there is some technical stuff I’d like to point out:

– You can skip right to Chapter 2 if you have a save file from a previous alpha where you completed the first chapter (it will be displayed in green in the profiles menu). BUT you will skip some content from the ending of Chapter 1… so it’s your call.
– I’ve put a lot of effort to optimize memory and garbage collection, so I hope any out-of-memory crashes are a thing of the past! Additionally, this should help a lot with people with low-end CPUs with stuttering problems.
– You can disable the gamepad mode entirely in the control options if it interferes with your setup.
– The Epilogue will probably be unavailable until the final release.

Even though we’ve tested this update pretty heavily, it was impossible to catch and fix all the bugs given the size of the changes, so please bear with us! There is some content that did not make it into this update, but for now we will focus on fixing any non-minor bugs we find.

We are slowly nearing the end of development, so if you’ve already played some of Darkwood, we strongly advise you wait until the final release so you don’t burn yourself out.

I’d like to thank all the testers who helped out during the last few weeks of huntings for bugs: ShadyS, FireRage259, DeforMC and SDF121! Much love guys!

In the meantime, we will be visiting streams and watching gameplay footage from you guys!

Yours faithfully,
The Acid Wizard 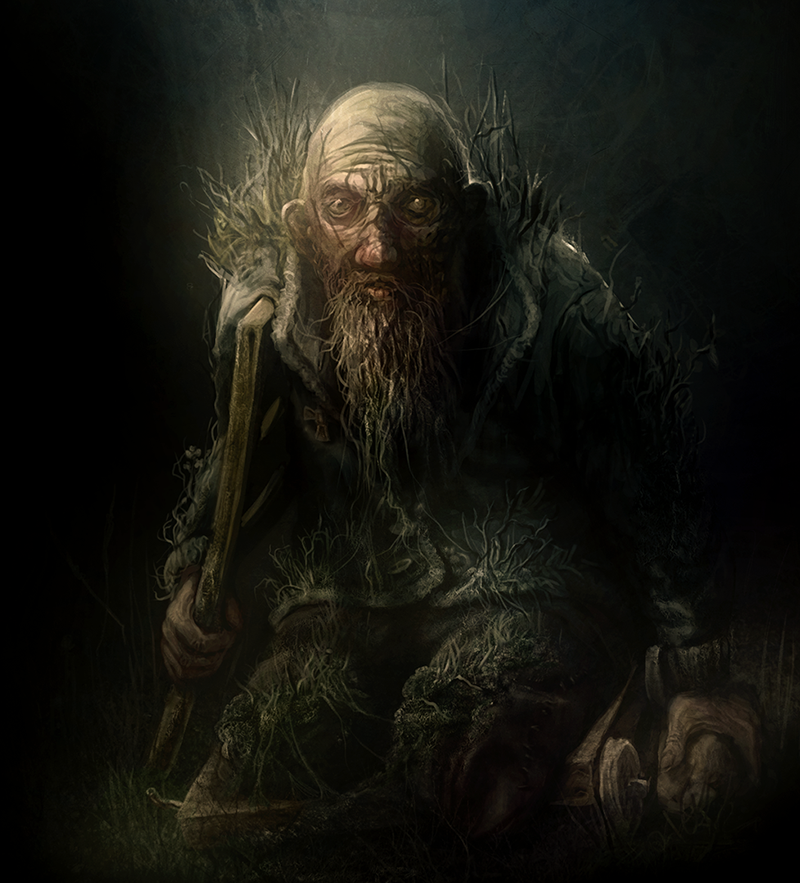