Guess what! We’ve been game jamming recently, making a game called After The Credits! You can play it here, in your browser.

If you haven’t heard about it yet, the Global Game Jam is a yearly event, where people all around the world gather in different places (called sites), and make a game in 48 hours on a given subject. Our site in Warsaw was PolyJam! 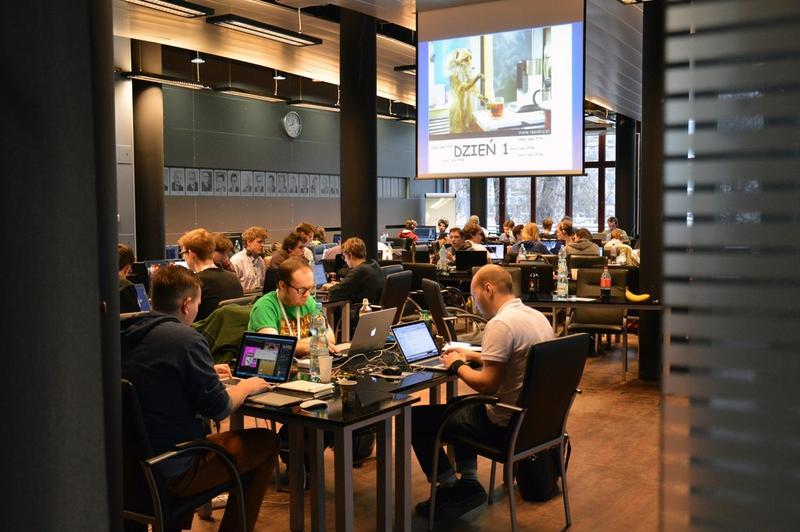 Less than a hundred people cramped in a room for 48 hours. Can you just smell the work in the air?

4:58 PM
We arrive at the site. One of the sponsors (a bank) is having a presentation. About loans. Some time after that, this year’s keynotes are played. One of them was pretty trippy . The theme is announced, and it’s a question : “What do we do now?“.

We brainstorm for an hour or so about what we want to create. Very quickly we get the idea we like: Let’s make a game about a video game character (in this case, Bill from Contra) returning to normal life, after he has defeated the final boss. The twist is, he can only use the same set of skills he has acquired during his previous adventures!

We talk about some other ideas, but since we’re satisfied with the one we have, we leave the site to get our hardware.

9:23 PM
It took way longer than we expected, but we’re back and ready to work! Well, not exactly. Artur’s computer is not working. He and Kuba need to go to his apartment and get his laptop. The day is almost over and we haven’t done anything yet, and the atmosphere is becoming tense.

11:03PM
The guys are back. It turns out, Artur forgot a cable to connect his tablet to the laptop, so he can’t work well. We can’t really get the internet to work, so working together will be pretty hard. It wouldn’t be so bad, but we’re having second thoughts about the game we want to make, and having these technical difficulties pile up like this, it really hits our morale. We go back to brainstorming.

1:10AM
We decide to stick with the original idea, as we can’t think of anything better at the moment, but most of the team is unconvinced and can’t really focus. We’re also pretty tired.

3:32AM
I made some prototypes for movement, but we haven’t done anything besides that. This sucks. We call it a night.

11:02AM
We were supposed to meet at 10:00 AM, but I overslept. Now we’re completely unsure of what we want to make. We’re not convinced about the art style (which will need to be consistent with Contra), the gameplay (which will be extremely simple, as we will only have time to make a few gags), and only scratching the surface of the subject because of the limited controls and time frame. We brainstorm again. 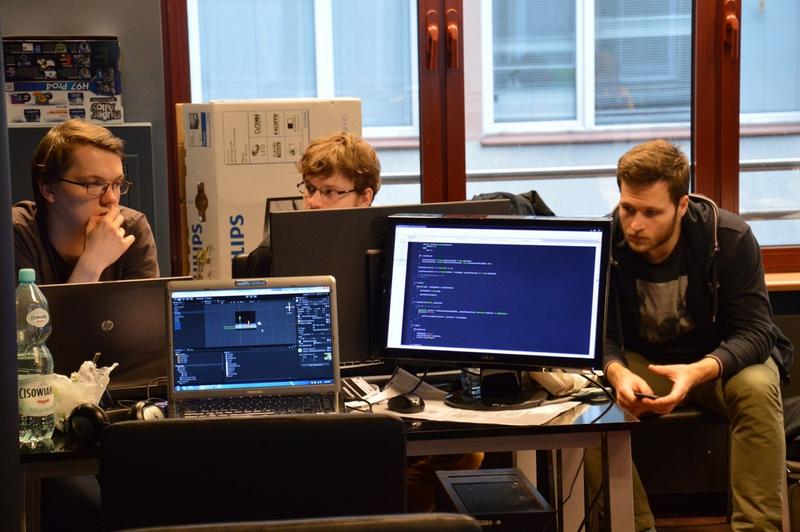 THINGS ARE NOT GOING VERY WELL

1:30 PM
Success! We’re now sure what we want to make and have no doubts about the project. We didn’t alter the idea, but we needed to convince ourselves about what’s good (and bad) about it, and just go with it.

In a horizontal company structure like ours, where the fun of creating something and the game itself is a major motivation, being confident about the project you are making is extremely important.  If someone from the team is unsure about anything, the game will end up a disaster.

4:30 AM
Nothing out of the ordinary happens during the whole day. We’re jamming, which means we work hard, eat pizza and have fun! We’ve got a (somewhat) working game. We’re aware that it will look like shit until it’s finished, so we don’t stress about the current state of the game.

4:00PM
Work is going well and we make it just in time for the presentation, unfortunately Artur didn’t feel too well and had to go home. The presentation goes well and After The Credits grabs 1st place!

Lots of other crazy games have been made there by talented people, you can check them out here!

A group photo after the event. Find the Wizards!

Overall, even though the atmosphere was pretty bad because of our technical (and creative) difficulties, the event was great, thanks to great organization and fellow jammers!

The 2 weeks after the jam, however, were not very fortunate for us – after Artur’s PC refused to cooperate, Kuba’s hard drive died a few days later. What’s worse is that last week, he suddenly felt very bad and was taken to the hospital. He gave us a bit of a scare when his pulse dropped to 35. Luckily it looks like he will have to go through a few procedures and all will be fine, and today he’s back in work!

In the meantime, we’re returning to work on Darkwood. Right now we’re working on a behind the scenes system which will dynamically change the game (especially night time) based on your current actions / situation. You can expect a basic version of it in the next update!